Earlier this week Mayor Muriel Bowser of Washington DC announced her plan to legalize recreational marijuana. Five years ago, DC residents voted in overwhelming support for legalization, but since then federal legislation has continued to stand in the way. Republicans in Congress repeatedly block any legislation to decriminalize weed.

Marijuana prohibition dates back some 80 years, with the federal government outlawing the sale, cultivation, and all uses of the plant. Legalizing marijuana is one of the few hot button issues in the states that has widespread support with the Pew Research Center reporting that last year 62% of Americans were in favor of legalization. Even the traditionally conservative states are in on the action, with Oklahoma voting to join the other states that have legalized the use of medicinal marijuana. American President Donald Trump signed legislation to legalize hemp, a plant identical to marijuana but lacking the psychoactive compound THC in December of 2018. Also last year, American neighbors Canada and Mexico, both federally legalized marijuana, so the peer pressure is definitely on for the United States to follow suit. 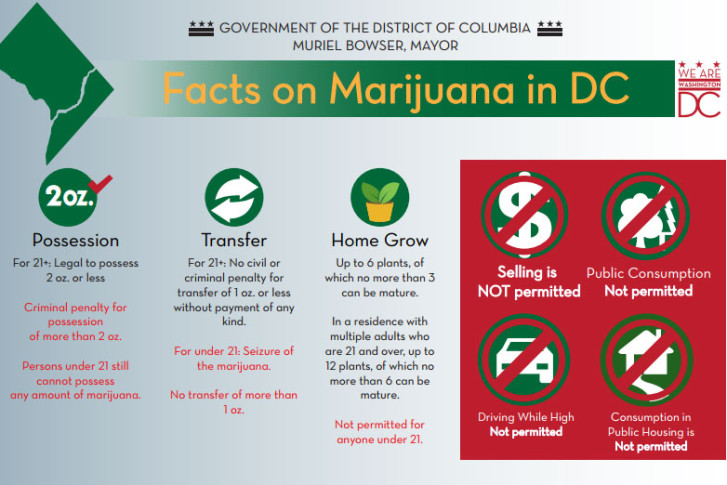 What’s the Deal in DC?

At the moment, Washingtonians can do almost everything. Medical cannabis in Washington DC has been legal to use since 1998. In 2014 Washington D.C. residents were granted the right to possess up to two ounces for recreational use. Unique to this region, residents can also trade up to an ounce of marijuana if no money or anything else can be exchanged. So basically, they can do everything except sell the drug.

This puts residents in a sort of weird situation. What’s happened now is a sort of bartering system has been put in place. Those who want to “buy” weed can simply exchange a pair of shoes, a t-shirt, maybe a bag of fries, or literally any other item to get some bud.

Mayor Bowser argues that this bizarre marijuana economy is a public safety hazard in which consumers don’t have enough information about the weed their trading for and consuming. She also argues that the local government is missing out on a big chunk of revenue from taxing the sale of marijuana products.

Bowser’s bill would raise the minimum purchasing age to 21 and have the existing eight marijuana cultivation centers open dispensaries. It would also help crack down on the weird gift exchange business that is currently dominating the weed economy, and it would limit public consumption of marijuana to dispensaries and hookah lounges. Cannabis products would have a sales tax of 17% with a plan to funnel 100% of the revenue into housing plans for the district. Another positive for the bill is the inclusion of persons with marijuana misdemeanors in the new cannabis sales industry.

The new licensing and regulation procedures would fall under the jurisdiction of the Alcoholic Beverage Regulation Administration, which also probably be renamed to include its new involvement in the marijuana business.

In argument for her bill, Mayor Bowser says that her legislative efforts are to give DC residents the option to buy weed legally, without the weird gift economy that’s been created. She said she also aims to drive out the illegal market in an attempt to mitigate violence in the communities where it thrives.

The marijuana movement in Washington DC has been subject to a fair amount of racism. African Americans have been the main targets for weed-related arrests, making up a jaw dropping 90% of all marijuana arrests. It is a huge racial disparity, especially given that there is no statistic showing a racial difference in marijuana users.

In response to these criticisms, DC police responded that these statistics are not reflection of the situation now. They also added that a new practice of issuing citations has been implemented instead of making an arrest.

The current cannabis cultivators are obviously in heavy favor of the new legislation. If the centers are allowed to run new revenue markets, then that’s more money for them. While most would assume that there is cause for worry from on the street weed sale competitors, most cultivators aren’t. This is because they believe that DC residents will be more likely to want to purchase products that have been tested and are regulated for safe consumption. People like to know what they’re buying, and when it comes to weed usage, safe consumption is of the utmost importance. Despite the fact that buying from a dispensary is undoubtedly the more expensive option, weed patrons will pay the price to know what it is they’re smoking.

New revenue markets and sales regulations would also open the door for potential partnerships. Dispensaries could buddy up (pun intended) with bakeries to make and sell edibles or other business for different marijuana products. Teaming up with different entrepreneurs around the district will also help create more jobs in the new marijuana retail industry.

Share
Previous Your Complete Guide to the Astounding Benefits of CBD Oil
Next Want to Buy Marijuana Online? Read These Tips First!

How to Find the Best Cannabis Lawyer?