The era of vaping, or ‘vaporizing’ is upon us, and many smokers are turning to the claim that vaporizers can keep certain illnesses associated with traditional smoking at bay and their health in check.  Is vaping the next best thing?  While studies take many years for results, only time will tell.  There is a large debate on the safety of medical marijuana. Many people are moving to a safer alternative to smoking which is called a vaporizer.  For now, we, among many, think it’s the safer alternative to go.

People use vaporizers to inhale THC into the lungs and absorb it into the bloodstream by taking a deep inhale, holding it in, blowing it out, and repeating. Vaporizers are considered safer than using a bong, joint, blunt, pipe, can, or bowl.

You’re filtering out more than 95% of all carcinogens and poisons. There are over 400 different chemicals in marijuana and many of them activate when combustion occurs on the cannabis flower. Vaporizers prevent combustion to the weed so it’ll never burn depending on the quality of the brand name you’re using.

Many people when smoking marijuana, want to reach a high feeling which leads to euphoria, laughter, and extreme hunger. Some strains for certain brain chemistry can create negative effects which include sleepiness, laziness, insomnia, dizziness, anxiety, and panic attacks. Thoughts and feelings are only experienced in the user’s head as the person can have a nervous breakdown if he or she is the only one stoned while out in public thinking everyone knows they’re high as a kite.  Overcoming fears of smokers’ anxiety is a psychological state of change. The person must have a positive mindset prior to inhaling THC.

Vaporizers have been around for many years. When the new form of vaporizers came out at the beginning of the 21st century, only a few people knew about them.  Many people quickly started discovering them in 2010.

Vaporization is an alternative to burning (smoking) that avoids the inhalation of many toxic and cancer-causing by-products.  A vaporizer is a battery or electrical-powered device that vaporizes herbs and oils.   Common vape materials include oils, cannabis e-liquid/e-juice for nicotine, or cannabis buds/wax/oil.  With vaping, you load up your material in your chamber, whether oil or herbs, close the mouthpiece, turn it on, and vape to your desire.

This is a logical option for most experienced or health-conscious marijuana users. With a vaporizer, you have an effective way to continue heating the herbs to a temperature that’s high enough to extract the CBD, THC, or the other cannabinoids. While this is true, the temperatures aren’t so high that they release possibly harmful toxins.

With vaporization, you can minimize the risks that are associated with smoking. This is a method that also reduces the odor. 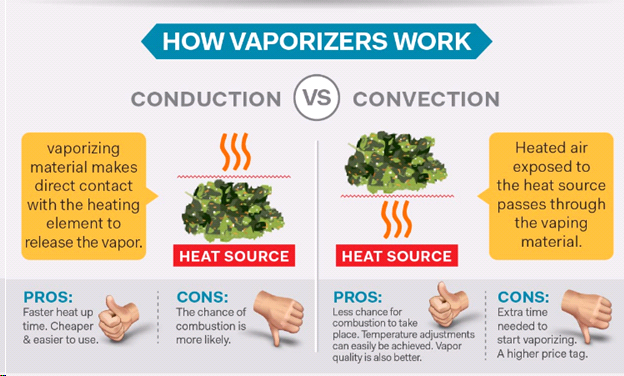 The most immediate negative impact of smoking, particularly cannabis comes from the inhalation applications that the smoker exposes themselves to on a frequent basis.  Lighting buds of marijuana is a necessary way for reaching the temperatures required to release active compounds (tetrahydrocannabinol, or THC) that give cannabis its potency.  The effects of combustion are dangerous and cause significant or irreversible damage to the respiratory system.  Smoke inhalation delivers damaging carcinogens known to cause cancer and damage other parts of the lungs.  The most immediate and noticeable effect is the irritation of the windpipe, and long-term exposure to any source of hot smoke is hard and damaging to the lungs.  Frequent smokers may find black mucus, yellow fingers, and 5x the tar in marijuana, which greatly damages the cardiovascular system.  Many may think that by using a bong or glass pipe that they are filtering out poisonous chemicals, but this is far from the truth.

Marijuana is used and growing in popularity with vaping. Since there are many new technologies with vaporizers, you can find that different ways of vaporizing your weed are present since we are in the advanced technological stages of developing better alternatives to smoking medical marijuana.

In case you didn’t know, most pen vaporizers are functional with oils and waxes. There are extenders for marijuana or materials that you can buy for $60 more dollars but not all pen vaporizers can function with marijuana. Pen vaporizers are handheld, functional at lasting longer than the battery life, and can usually fit in a pen holder, your pocket, or anywhere that has a small place for it to fit. They’re easier to travel with and look just like a regular pen. Many complaints with the pen vaporizer are it doesn’t have good filtration methods compared to the other types of vaporizers and oils can enhance cardiovascular problems quicker.

Just the fact that you gain 85% more potent hits, 95% filtration of carcinogens, and save way more money, in the long run, are the pros of vaporizers. You’re health will treat you better, you’ll feel better and you’ll notice you have more energy, clean lungs, and a healthier feeling once you switch to vaporizers. People use vaporizers or electronic cigarettes to also help reduce their chances of smoking a combustion way of heating up your weed, tobacco or herbal blends & essential oils.

Vaporizers are an alternative method to burning that avoids a person from inhaling nasty toxic & carcinogenic by-products. With safe parts used in creating a vaporizer such as metal, glass which are formed into unique chambers like the straight bore, sequential venturi, or the venturi extraction chamber. All harmful effects are reduced significantly compared to smoking and you’re reducing many different health risks associated with smoking. We’re by no means saying all health risks are avoided using a vaporizer but we are saying we have scientific proof that it does reduce the risks of diseases, damages, and cancers by inhaling vapor instead of combustion smoke.

Most medical marijuana patients that use vaporizers aren’t daily smokers but need medical marijuana to reduce the side effects of many diseases that exist to make life more painful and less enjoyable as opposed to not having marijuana in one’s system with a serious, chronic disease. Over 20% of patients who use vaporizers that suffer from chronic pain, multiple sclerosis, epilepsy, and HIV find life more enjoyable with the use of cannabis strictly for therapeutic purposes. 40% of patients’ pain is reduced when they use marijuana.

After reading all the facts and information on vaporizers, it is safe to know that you have learned the pros and cons of every method of use when smoking marijuana. You now know that it’ll benefit your health, reduce risks to your cardiovascular system and make life more enjoyable to those suffering with severe chronic diseases. It’ll be best to buy a vaporizer that costs more than $100 since the more you spend the better vaporizer you get. You don’t want to buy a crap vaporizer that leads to combustion which would defeat the purpose of vaporizing and expose you to the harmful elements of combustion. Vaporization crystallizes the THC and never burns the leaf. Most people will use the cannabis flower after the vaporizer session to make an edible as it’ll still contain a low amount of THC with the taste of food and a weed flavor.

There are many benefits and features to marijuana vaporizers, the most important benefit that vaporizers are a big reason for the success of the medical marijuana industry for providing a very safe method of medicating that will not treat various illnesses, but save a person’s health and avoid other illnesses.

While studies take many years for results, only time will tell. For now, we, among many, think it’s the safer alternative to go.

Studies have been conducted showing that vaporizing marijuana exposes the user to lower levels of toxins than actually smoking it.  A 2007 study by the University of California, San Francisco, published in the Journal of the American Academy of Neurology, found that “there was virtually no exposure to harmful combustion products using the vaporizing device.”   What this means in more simple terms is that the vaporizer completely eliminates every last chemical that is associated with burning marijuana.

Carcinogens can be found emanating from something as harmless as a campfire. The primary difference is that patients and enthusiasts expose themselves to smoke so regularly and so closely, that they put themselves at risk, not only from the burning of buds, but to lighter flame soot, burning of paper, and other materials that also release additional carcinogens.

Share
Previous Does Consumption of CBD Numb the Brain?
Next Muscle Recovery and More: 7 Reasons Why Athletes Love Cannabis 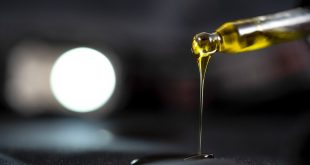 The opioid crisis is becoming more severe every year. Recent statistics have revealed that opioid …